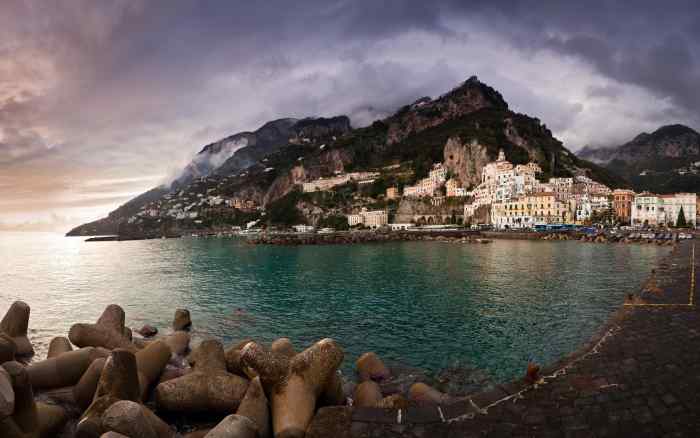 There are some lands in the world so excruciatingly exquisite that it is challenging to put that beauty into words, one of them is Italy’s Amalfi Coast.

South of Naples in the Campagnia Region, the Amalfi Coast is a UNESCO World Heritage Site, known for its impressive driving force; a complexity of cliffside villages; precipitously upright vineyards; and orange, lemon and olive plantations perched at dizzying heights above the Mediterranean Sea. Amalfi Coast formally begins in Positano and continues approximately to Salerno, the road snaking and twisting through the towns of Amalfi, Vietri Sul Mare, Maiori, Cetara, and Ravello.

Set in a unique environment, it is an exemplar of a Mediterranean landscape and of enormous cultural and natural value due to its topographical characteristics, as well as its historical evolution. For this, it is protected by UNESCO.

The cities and countryside towns of the Amalfi Coast are different one from the other, each with its own traditions and peculiarities that render them singular and unique; nonetheless, they are all characterized by architectonic monuments like the Saracen Tower of Cetara; the Romanesque Cathedral of Amalfi and its “Cloister of Paradise,” clearly under the Oriental influence; the Church of San Salvatore de’ Bireto in Atrani, where the swearing-in ceremony for the Doges of Amalfi traditionally takes place; and Ravello, with its beautiful cathedral and the superb Villa Rufolo.
The enchanting town of Vietri sul Mare is considered to be the “cradle of majolica;” thus it is no random fact that the gorgeous Church of San Giovanni Battista and the facade of the Arciconfraternita dell’Annunziata e del Rosario are covered in these splendid and colorful ceramic tiles.

How To Travel To the Amalfi Coast

The allure of the Amalfi Coast’s natural beauty has been drawing people to the region long before it had a name. Its dramatic charm and idyllic weather enticed ancient Roman nobles to build their villas there, a real estate trend that, overtime, never faded. Today the mountains and sea cliffs are dotted with pastel confections of holiday homes and sumptuous villas, which have elevated the coastline to one of the most fabulous and unique destinations in the world. Its fragile cultural landscape—churches, gardens, vineyards and towns—are divided into thirteen different municipalities, and were listed as UNESCO World Heritage sites in 1997. Positano, Amalfi, and Ravello are the area’s top destinations, attracting thousands of jetsetters each year.

Getting to the Amalfi Coast

No matter how you arrive to the Amalfi Coast, the journey is always scenic. Depending on the time of year, it’s possible to take fast ferries like Alilauro from Napoli to the main port of Amalfi. The two-to-three-hour journeys are not direct, and many make stops in destinations like Capri or Sorrento before reaching Amalfi’s port. Additionally, boats like the Travelmar leave from Salerno and stop at most of Amalfi’s largest coastal municipalities.

Traveling on Trenitalia, Italy’s national train company, is the best for those who can’t stomach a sea commute. Their Freccia Rossa trains from Napoli Centrale to Sorrento are the most direct and efficient. Once in Sorrento, catch a bus to your destination, as many companies like Sitabus depart regularly from the city’s stations. Those traveling from Rome or Naples can opt for one of the new economical shuttle sharing systems like Positano Shuttle. It leaves from both international airports and deposits travelers directly in Positano.

For many, traveling by car is still the most romantic and independent way to get from one destination to another. You can rent a car at either international airports in Rome or Naples, or opt for something more lavish from the Positano Car Service. Their fleet of large and small luxury vehicles will ensure you’re the most stylish tourist on the road.

Apart from its beauty — in common with its neighbor villages — and the fact that it is much less crowded than the tourist oases of Amalfi and Positano, Ravello has an undeniable cachet. The place almost reeks of glamour, as the rich and famous have been flocking here for years.

Composer Richard Wagner has a cobblestone street named for him, and a group of writers, most notably Virginia Woolf and E.M. Forster, cavorted here. Author Gore Vidal owned a house in Ravello (a stark white villa hugging a mountainside above the sea), and dancer Rudolf Nureyev owned an entire island just off the coast. In the 1930s, actress Greta Garbo had a tryst with conductor Leopold Stokowski in the secluded Villa Cimbrone, and years later, first lady Jacqueline Kennedy, worried over her husband’s dalliance with Marilyn Monroe, carried up daughter Caroline and briefly took a flight to the seaside villa of her friend Gianni Agnelli, president of Fiat.

Ravello also is famous for two of the Amalfi Coast’s most famous spots — the Villa Rufolo and the Villa Cimbrone. Dating from the 12th century, the Villa Rufolo merges a variety of architectural styles, including a square Norman tower and an elaborate Moorish cloister. Its most famous features, however, are the pleasant gardens. A terrace garden looking out on the sea is the main place of the Ravello Festival, an annual event from June to September, combining opera, dance and orchestral music.

How to travel to Italy

Every year many visitors travel to Italy in search of…

Yes, Sicily appears like it's being expelled of Italy by the point of the boot, it's very much a part of this varied country. This island of Sicily Italy has its own different cultures and is worthy a visit all on its own - not least because it's challenging enough to get here from the Italian mainland that you really don't want to con yourself by just taking a few days to see it.